An open donor nephrectomy was the only option for removing a donor's kidney from the 1950's to the mid-1990's.

This surgery occurred under general anesthesia and involved a 6 to 10-inch incision on the front and side of the abdomen, which requires cutting through several layers of muscle to access the kidney being removed. This surgery required a much longer recovery period compared to current laparoscopic procedures.

Today, it is rare to perform open nephrectomies for the sake of kidney donation. Rarely, laparoscopic procedures must be "converted" to an open procedure due to complications such as bleeding. 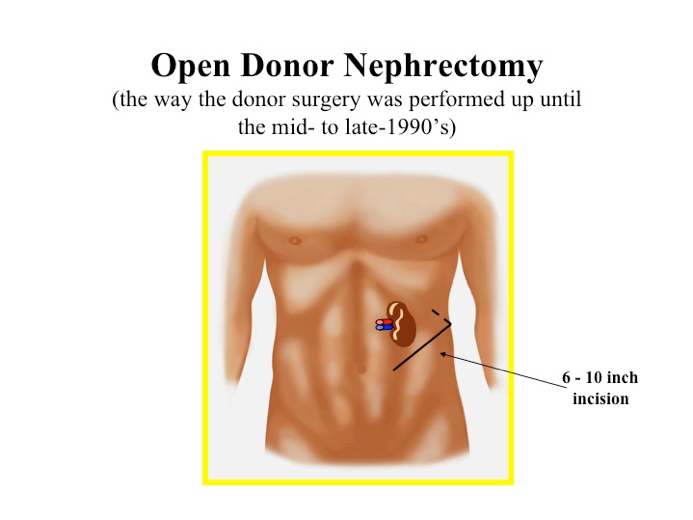 Laparoscopic donor nephrectomy is minimally invasive surgery that utilizes instruments such as a camera (videoscope) and tools (instruments) to remove the kidney on long, narrow rods that are placed into the abdomen through small incisions.

The videoscope and surgical instruments are maneuvered through three or four small incisions in the abdomen. Carbon dioxide is pumped into the abdominal cavity to inflate it, which helps the surgeon to see and maneuver better.

Once the kidney is freed, it is secured in a bag and pulled through an incision that is about 3 inches long and is several inches below the umbilicus (belly button). 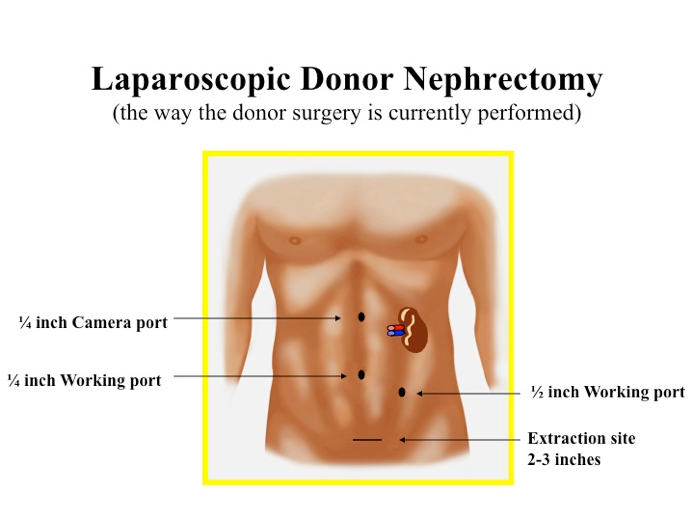 Another laparoscopic technique called hand-assisted laparoscopic nephrectomy may also be used to remove the kidney.

In this procedure, one of the incisions is slightly larger to be able to accommodate the surgeon's hand, which allows the surgeon to use one hand to feel the kidney and surrounding areas. Once freed, the kidney is then removed by hand through the incision. 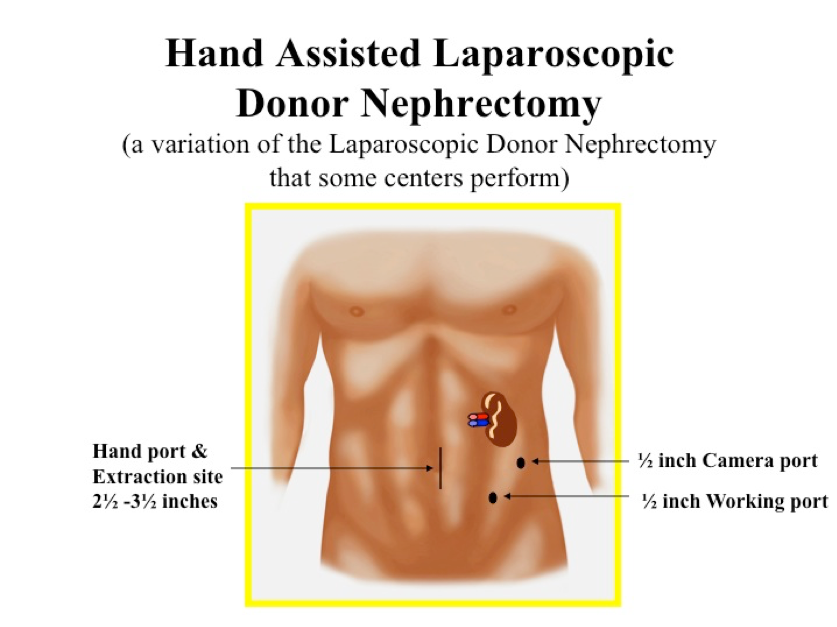 In 2008, a new modification of the laparoscopic donor nephrectomy was pioneered at our center by Dr. Del Pizzo, and began to be utilized at some transplant centers.

During the procedure, the donor surgeon uses a single-entry port through the patient's navel (belly button) to safely dissect the kidney from its surrounding attachments, using a laparoscopic camera and instruments. This same incision is then used to remove the kidney for transplantation. No incisions outside the belly button are needed. The graphic below shows the incision used for the single port nephrectomy.

This exciting technological advancement is the latest innovative step in providing a less invasive surgical option for kidney donors. It may represent an improvement in the standard laparoscopic technique, which requires three or four tiny incisions as well as a three-inch incision to remove the organ.

This operation has been performed with minimal risk and excellent outcomes. Being able to accomplish the same procedure safely through a single natural opening in the belly button may help donors recover faster and have an improved cosmetic result. 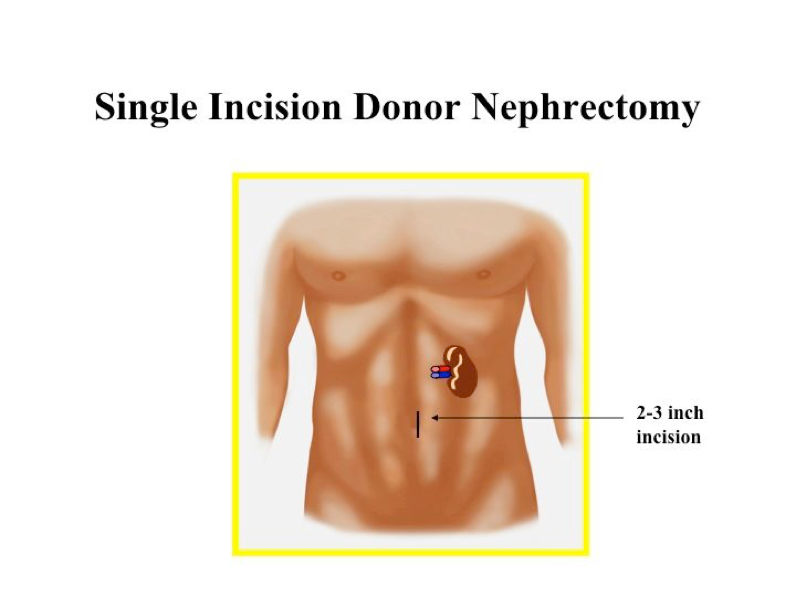 The Weill Cornell Transplant Program was the first center in New York to perform a laparoscopic single port kidney removal through the navel for a living donor kidney and has quickly become a national leader in performing this surgical innovation.

Our donor team remains dedicated to being on the cutting edge of minimally invasive surgery to best serve our very special kidney donors, and have performed a prospective randomized trial to assess this technique.

The most common complication experienced by donors is tenderness, itching, and/or pain at the site of the surgical incision(s). In addition, the carbon dioxide gas pumped into the body during the surgery to help the surgeon see may cause shoulder pain after the procedure.

Donors may also experience gastrointestinal upset. Donors should not lift anything heavy (greater than 10 pounds) for about 4 weeks after the surgery.

Most donors who work in an office setting return to work within 2 to 3 weeks of their surgery. Donors with more physically demanding professions generally need 4 to 6 weeks of recovery before returning to that type of work.