Weill Cornell Medicine and NewYork-Presbyterian is proud to mentor and collaborate with laboratory and clinical scientists from all over the world, promoting the exchange of novel research, treatments, and ideas that ultimately lead to better health outcomes for patients within our institution and beyond.

For 15 years and counting, the American Society of Clinical Oncology (ASCO), the leading organization for professionals who care for people with cancer, has granted 20 apprentice oncologists from low- and middle-income countries the opportunity of a lifetime through participation in the International Development and Education Award (IDEA) program. The award program welcomes recipients to attend the ASCO annual meeting in Chicago, as well as visit their assigned mentor’s medical institution to gain insight as to how to improve cancer care for patients in their own countries.

This year, Weill Cornell Medicine and NewYork-Presbyterian had the privilege of making twice the impact on the global field of cancer care by hosting two IDEA recipients: Nida Anwar, MBBS, FCPS, of the National Institute of Blood Diseases and Bone Marrow Transplant in Pakistan, and Joseph Bernard, MD, of St. Luke Family Hospital in Haiti. We spoke with Drs. Anwar and Bernard to find out what they learned from stepping foot in our labs and clinics, and which aspects of our practice they plan to implement back home. 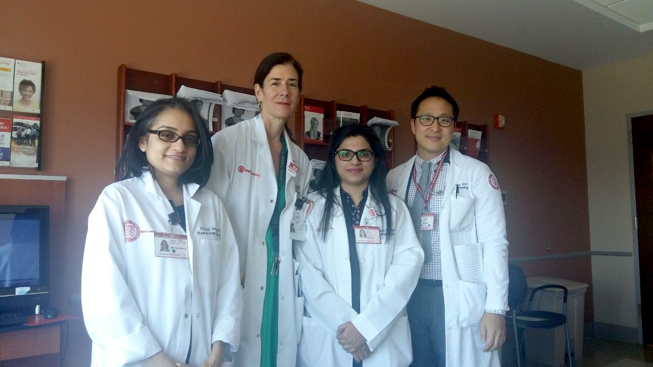 Dr. Nida Anwar cites the ASCO IDEA program as one of the greatest opportunities of her career and credits her experience with mentors Drs. Ellen Ritchie and Pinkal Desai for transforming her attitude toward cancer in just three days.

“I used to think that if a patient has AML and can’t afford treatment, that’s the end of his life,” said Dr. Anwar, who currently looks after patients with myelodysplastic disorders at the National Institute of Blood Diseases and Bone Marrow Transplant, one of only three centers in Pakistan that performs transplant. “But at Weill Cornell, the physicians fight the cancer until the very end. I learned that we have to be the ones who fight this. We have to cure this. Why think that just because a patient cannot afford treatment, he doesn’t deserve to live?”

While Dr. Anwar was inspired by the Weill Cornell Medicine and NewYork-Presbyterian physicians’ compassion for their patients and their focus on quality of life, she was also struck by the patients’ eagerness to learn as much about their disease as possible so that they can partner with their doctors to fight it.

“In our part of the world, patients have a very low literacy rate and rarely ask us about the disease they’re battling,” she said. “In the West, the people are so well aware. They come to the doctor with a pen, paper, and blood counts.”

Dr. Anwar is grateful to Weill Cornell Medicine and NewYork-Presbyterian for her newfound confidence and determination in fighting cancer, and she looks forward to applying a more empathetic approach to patient care in her own practice. 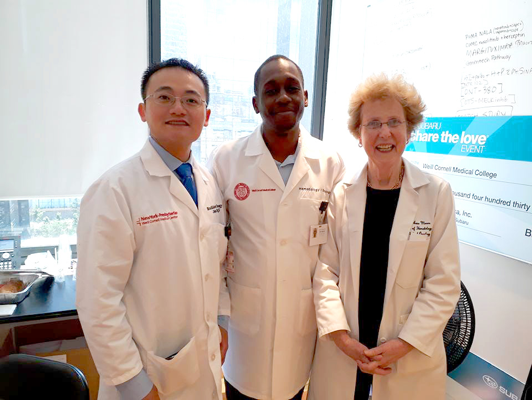 What began as a search for ways to compare U.S. medicine with that of Haiti ultimately resulted in Dr. Joseph Bernard becoming the country’s first ASCO IDEA applicant and recipient.

Dr. Bernard, who specializes in the treatment of breast cancer, the most frequently presented cancer in his clinic at St. Luke Family Hospital, said that the annual meeting was rich academically — but also frustrating due to major disparities in treatment accessibility between the two nations.

“I appreciate the concept of global oncology and stratifying the standards according to availability in each country, but in terms of how I can apply what’s being taught in oncology in 2017, it’s not possible,” said Dr. Bernard, explaining that Haiti has access to cytotoxic drugs (those that are toxic to cells) and surgery, but not to radiation therapy, immunotherapy, or imaging technology.

In visiting breast and lung cancer clinics with his mentors Drs. Anne Moore and Ashish Saxena, Dr. Bernard noted that the lack of imaging technology in Haiti means that physicians depend chiefly on medical expertise to reach a diagnosis, whereas physicians in the U.S. can use a CT scan to take care of most of the legwork.

Additionally, the increased health awareness and education in the U.S. leads patients to present to physicians much earlier than patients do so in Haiti, where Dr. Bernard said his team sees a lot of late-stage (stage 3,4) disease. He even sees patients who have no idea what cancer is.

“Oncology is special because you’re not only a physician; you’re a psychologist, a teacher, a friend,” he said. “Not a lot of physicians are trained in oncology, so I feel privileged to be among them.”