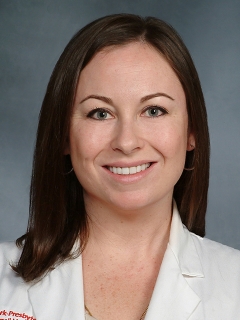 The gender gap for physicians is rapidly closing. In fact, about half of all residents and fellows are women. Certain fields have a greater gender imbalance than others. Women outnumber men in several specialties, but the majority of surgeons are men. Only five percent of cardiothoracic surgeons are women.

When Dr. Erin Iannacone told her family that she wanted to be a cardiac surgeon, they were concerned about the impact this demanding career could have on her life. “I was asked a few times,” she recalls, “‘Do you really need to do this?’”

Dr. Iannacone’s father had been an orthopedic surgeon, so both she and her family were aware of how challenging a career in surgery could be. However, having grown up watching her father work was also a large part of her motivation. Every weekend, Dr. Iannacone’s father would take one of his four daughters to the hospital to make rounds with him, engendering a fascination with medicine and surgery.

When she began medical school, Dr. Iannacone tried to keep an open mind, but as soon as she started her surgery rotation she knew it was what she wanted to do. Soon after beginning her general surgery residency, she was drawn to cardiac surgery.

“Seeing patients unable to walk in, operate on their heart, and see them walk out feeling better than they did a week ago, that’s the greatest opportunity as a doctor,” she explains. She had found her calling.

The path ahead was not an easy one. “The training for cardiac surgery is difficult because it should be," explains Dr. Iannacone. "These are high-risk procedures that sometimes require making life-saving decisions on a second-by-second basis.”

She never wanted gender to be a determinant of her work. “I never felt that I couldn’t be as good as any of the men,” she says, “I was — and am — determined to be the best.”When it came time to choose a fellowship, she was selected to join a top program in the country at Weill Cornell Medicine.

She is grateful for the support she’s had along the way, explaining, “I had very strong female mentors in medical school and residency; my general surgery program was more than 50 percent female.”

When she was hired permanently at Weill Cornell Medicine, Dr. Iannacone saw she was able to fill a need for patients. For many, it was specifically because she was a woman that they felt more comfortable with her as their surgeon. Before she joined the team, this was not an option for patients.

Dr. Iannacone’s role as a female cardiac surgeon becomes even more significant when the statistics of heart disease are taken into consideration. Forty-three million women in the US alone are affected by heart disease, but many women are unaware of the risk factors. Warning signs are often ignored by both doctors and patients as symptoms may present themselves differently in women, and women are less likely to talk to their doctor or call 911 when symptoms do occur.

Dr. Iannacone hopes that greater public education and better medical attention for women can help change this. Together with the Department of Cardiothoracic Surgery at Weill Cornell Medicine, Dr. Iannacone has made women’s heart health a priority; pushing women to get regular checkups, control diabetes, improve their diet and exercise habits, and quit smoking.

“A lot of women say they are taking care of everyone else and do not have time to take care of themselves,” says Dr. Iannacone. “It’s important for women to advocate for themselves.”

For patients — male or female — who find themselves in need of a cardiac surgery, she stresses the importance of bringing a loved one along to all appointments to ask questions and absorb information. She also suggests finding a surgeon who has had rigorous training at top institutions and operates on a high number of patients per year. Finally, she encourages patients to seek out a hospital with an excellent intensive care unit (ICU) for expert care after surgery.

A message to future generations

Besides her advocacy work for her patients, Dr. Iannacone also empowers young women considering surgery. “We get requests from very young students, some as young as high schoolers, who contact us and want to talk or see the career,” she says. Slowly but surely, the gender gap in surgery and cardiac surgery is closing as interest grows in younger generations.

The fellowship program for cardiac surgery is particularly difficult when compared to other specialties, but Dr. Iannacone hopes this does not dissuade young women from entering the field. “It’s a great specialty,” she asserts, “and can be very satisfying and fulfilling.”

Dr. Iannacone reiterates how important good mentors are for medical students and young physicians. “I had such strong general surgery mentors,” she explains. “A lot of women already paved the way and helped us.Her own presence is certainly an influence for young women deciding their careers. Her success working in a field dominated by men will inspire others as they forge their own paths.