Skip to main content
Patient Care
Don't delay your care - schedule your next in-person appointment or Video Visit today. Please review our updated visitor policy and learn more about how we're continuing to keep you safe.
Patient Care
You are here
Home > News > David Epstein’s Flight Back to Health at Weill Cornell

David Epstein’s Flight Back to Health at Weill Cornell 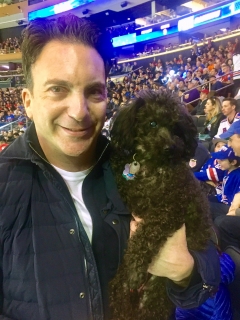 When David Epstein — a healthy, active 41-year-old father of three — went for his annual physician checkup, he was expecting a normal appointment. His primary care physician, however, found something abnormal during his routine heart exam and referred David to a cardiologist.

“When I saw the EKG tech’s reaction to my test results, I knew something was very wrong,” recalls David. The cardiologist confirmed the worst: David had a thoracic aortic aneurysm, and he was told by the physician that he needed heart surgery as soon as “yesterday.”

Coping with a dangerous diagnosis

An aneurysm is a condition where an artery is weakened and enlarged in a specific point, and this can lead to a rupture. An aneurysm can occur throughout the body, including the aorta, the body’s main blood vessel. Thoracic aortic aneurysms are rare (6-10 per every 100,000 people) and often fatal.

“Up until my diagnosis, the only time I had heard of an aneurysm was, unfortunately, as the cause of someone’s death,” says David. “My cardiologist said that my condition was a ‘ticking time bomb.’ I was incredibly shocked to find out that I was diagnosed with this, especially knowing that I showed no symptoms and was not in any pain.”

David and his family began seeking the best place for treatment and, after lots of research, they found Dr. Leonard Girardi at Weill Cornell Medicine. “When I learned that Dr. Girardi is one of the best cardiothoracic surgeons in the world,” explains David, “I knew I wanted him to perform my surgery.” David was reassured to learn that Weill Cornell Medicine successfully performs this type of surgery on a routine basis with some of the lowest complication rates in the world.

Three weeks after David’s primary care appointment, Dr. Girardi performed an eight-hour, open-heart surgery operation to repair the aneurysm. A heart and lung machine kept David alive during the procedure, while Dr. Girardi replaced the weak and bulging section of his aorta with a tube graft.

“I decided to approach the surgery as I would a trip,” says David. “The hospital was the airport and the surgery was my flight back to health. I had to trust Dr. Girardi and the Weill Cornell Medicine team throughout the entire process.”

Dr. Girardi’s surgical expertise, along with his professional and supportive team, were paramount to the successful outcome. “I was impressed with Dr. Girardi and his staff through every step of my surgery and recovery,” David recounts. “I now tell Dr. Girardi that he should wear a cape.”

David remembers his initial recovery in the hospital as intense and, at times, scary. For the first six days, he was in the ICU and had to have an internal pacemaker. But through the hard work of both David and the Weill Cornell Medicine staff, he was able to leave the hospital after 10 days. Because the aortic repair spared his heart valve, he does not need blood thinners or long-term medications. After only six months, David also returned to his previous exercise regimen.

David continues to work with Dr. Girardi’s team as a part of a study to improve the three-dimensional MRI. “I am so grateful to be a part of this,” he explains. “This imaging technology helped save my life, and it’s heartwarming to know that I’m helping to improve it and save more lives.”

Reaching out to others

Now, four years after his traumatic diagnosis and emergent surgery, David has healed both physically and emotionally.

“At first, I encouraged my family and immediate circle of friends to go get a checkup immediately,” David says. “But now, I want to reach as many people as possible and share my story. I am living proof that preventive health care can save lives.” He also helps others undergoing similar surgeries as an Ambassador for AAAneurysm Outreach.

Currently, David is devoted to sharing his story and spreading his three-fold message: “First, you need to see your primary care doctor every year. Second, when you do go through a major surgery, you have to trust your surgeon and team completely. And third, a support system is vital for all of life’s challenges, including surgery.”