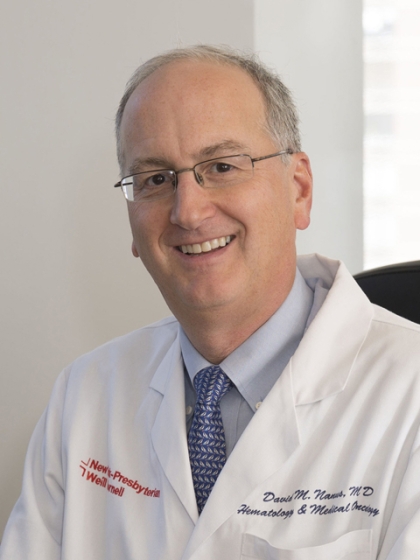 As far back as I remember, I have been interested in improving the care of patients with cancer through research aimed at developing new and more effective therapies, and by providing compassionate care. I am fortunate to work at an institution that enables me to care for patients within an outstanding hospital and medical college, where I am surrounded by like-minded physicians and staff that are most concerned about the well-being of our patients and their family members. The close relationships I develop with my patients and the continued efforts by my colleagues and me to find a cure inspire me to come to work every day with new hope and determination.

Dr. Nanus is an internationally recognized leader in the treatment and care of patients with genitourinary (GU) cancers, including cancers of the prostate, kidney, bladder and testes. He is actively involved in clinical, translational and basic research in GU malignancies, serving as principle or co-investigator on a variety of clinical research trials that incorporate novel targeted therapies for his patients.

Dr. Nanus served as Chief of the Division of Hematology and Medical Oncology at Weill Cornell Medicine for 14 years prior to becoming the Director of the NewYork-Presbyterian Hospital and Weill Cornell Medicine Healthcare Systems Cancer Program. Dr. Nanus is also the Associate Director of Clinical Services for the Sandra and Edward Meyer Cancer Center. He is the recipient of numerous awards including membership in the American Society for Clinical Investigation and the American Association of Physicians.

Dr. Nanus is a graduate of the University of Illinois and the Chicago Medical School at the Rosalind Franklin University of Medicine and Science. After completing clinical training in Medicine at Albert Einstein and Medical Oncology at Memorial Sloan Kettering Cancer Center, and research training at the Sloan Kettering Institute, he was invited to join the faculty at Memorial Sloan Kettering Cancer Center in 1989. Developing a program in GU cancer, he made several important contributions to clinical and basic research in kidney and prostate cancer. He was recruited to the full-time faculty of Weill Cornell Medical College in 1998.

At Weill Cornell, Dr. Nanus helped develop the Genitourinary (GU) Oncology Research Program focused on understanding the events that contribute to the progression of urologic cancers, and on developing new and more effective therapies to treat advanced prostate, kidney and bladder cancer. As a Director of the Genitourinary Oncology Research Laboratory, he works with a unique interdepartmental team of world class clinical researchers seeking to translate research on the molecular basis of GU cancers into improved cancer treatment.

2009-15   U.S. News and World Reports Top Doctors (Castle Connolly's estimation among the top 1% in the nation in his or her specialty)

2010   2010 Gold DOC Award for sensitivity, kindness and compassion in the practice of medicine, The Arnold P. Gold Foundation