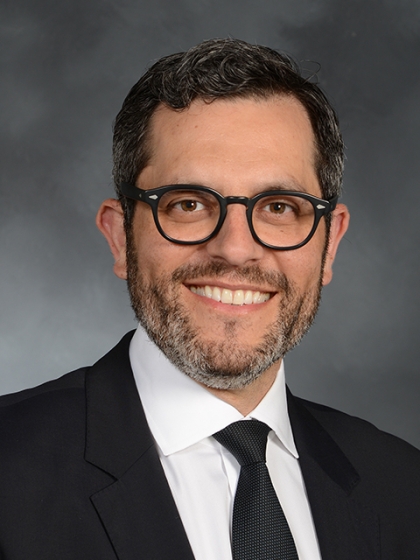 Dr. Aaron N. Pearlman is an Associate Professor of Clinical Otorhinolaryngology at Weill Cornell Medical College. His clinical interests include the medical and surgical management of sinonasal disorders in adults and children, including acute and chronic rhinosinusitis and diseases of the skull base. Dr. Pearlman also participates in the management of sleep apnea and sleep related disorders. As a board certified Otolaryngologist, he treats general otolaryngologic disorders such as ear infections, acid reflux, hearing loss, and tonsillitis.

•To watch a brief video and learn more about Dr. Pearlman click here

•If you are a new patient please click here prior to your appointment to download and fill out a new patient packet. We encourage you to bring this completed form and any prior imaging on a CD ROM to your consultation.

We look forward to meeting you and your family and thank you for choosing our practice.

Aaron N. Pearlman, MD is an associate clinical professor of Otolaryngology-Head and Neck Surgery at Weill Cornell Medicine in New York, New York, and has been in practice for nearly 15 years.  After graduating summa cum laude with a Bachelor of Science in Biology from the University of Maryland, he earned his medical degree from New York University School of Medicine.  He completed both an internship in General Surgery and a residency in Otolaryngology-Head and Neck Surgery at New York University School of Medicine.  He then went on to complete an advanced rhinology and skull base surgery fellowship at Northwestern University Feinberg School of Medicine’s Northwestern Memorial Hospital in Chicago, Illinois.  He is a member of the American Academy of Otolaryngology, a fellow of the American Rhinologic Society, and a fellow of the American College of Surgeons.

Dr. Pearlman is board certified in Otolaryngology and his clinical focus is on chronic inflammatory diseases of the nose and paranasal sinuses, treating patients both medically and surgically.  He is an advanced specialist in endoscopic sinus surgery and anterior skull base surgery.  Currently Dr. Pearlman practices in Manhattan, New York at New York Presbyterian Weill Cornell Medicine.  He is also privileged to treat patients at New York Presbyterian Brooklyn, New York Presbyterian Lower Manhattan Hospital, and is a consultant at the Hospital for Special Surgery.  For over 12 years Dr. Pearlman also treated patients at Lincoln Medical and Mental Health Center in the Bronx, New York where he helped to begin an advanced rhinology service with his neurosurgical colleagues.

Dr. Pearlman has served on various committees within the American Academy of Otolaryngology and the American Rhinologic Society.  He actively peer reviews journal articles for Laryngoscope, American Journal of Rhinology and Allergy, International Forum of Rhinology and Allergy, and American Journal of Neuroradiology.  Additionally, Dr. Pearlman serves on the Promotion and Graduation Committee for the medical college at Weill Cornell Medicine.  He was selected as a New York Rising Star from Superdoctors in 2013 and 2014.

He is a leader in the field of rhinology and has presented his research at various meetings within the United States and abroad.  Dr. Pearlman is the lead author and co-author of numerous peer-reviewed articles within the medical literature.  Currently, his research interests concern pediatric and adolescent chronic rhinosinusitis, as well as the impact of nasal septoplasty and inferior turbinate reduction on exercise tolerance.  He has also authored chapters in an array of medical textbooks.  Dr. Pearlman has been interviewed and quoted by the Washington Post, The Atlantic, and Self, amongst others.  He has also been featured on medical podcasts.

Dr. Pearlman grew up in western Maryland and currently resides in New York City.  He enjoys traveling, spending time with his family, and walking his dog.  Even though he’s lived in New York for nearly 25 years, he still roots for the Baltimore Ravens and occasionally, the Orioles.

As a fellow, Dr. Pearlman received an industry sponsored grant to examine the role of balloon sinuplasty in the office setting.

That Other Reason You Might Feel Terrible Right Now
May 25, 2021
Podcast: Special Edition of "The Differences Between COVID-19, Flu, Cold and Allergies"
May 10, 2021
Understanding Fall Allergies & COVID-19
October 6, 2020
Podcast: The Differences Between COVID, Flu, Cold and Allergies
April 28, 2020
Wait, How Does A Neti Pot Work Exactly? A Doctor Explains Nasal Irrigation Methods
March 31, 2020
Dear Science: What's the point of mucus?
January 9, 2017
Dear Science: Is listening with ear buds bad for your ears?
November 14, 2016
Q&A: Why Does My Nose Get Stuffy After a Workout?
July 24, 2014
View All News