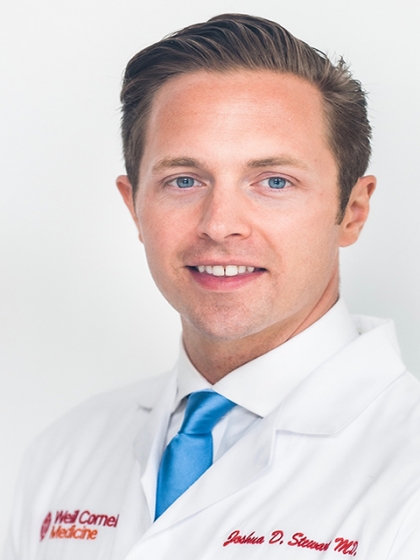 "As a patient at the Ronald O. Perelman and Claudia Cohen Center for Reproductive Medicine, you will have the most experienced team of physicians, scientists, and clinical staff committed to helping you achieve your dream of becoming a parent in a compassionate and personalized environment. Whether your goal is to have a healthy baby or to preserve your fertility options for the future, I will aim to get to know you on an individual level, as we work together to develop a treatment plan that is tailored to your unique story."

Dr. Stewart has received numerous awards for his clinical excellence, medical research, and teaching, including the Excellence in Teaching Award and the Outstanding House Staff Award as a chief resident at New York-Presbyterian Hospital/Weill Cornell Medical Center. In addition to his clinical responsibilities, Dr. Stewart has authored and co-authored many articles and textbook chapters in the field of reproductive endocrinology and infertility. He has presented his research at numerous national and international meetings on topics such as fertility preservation, pre-implantation genetic testing, male factor infertility, frozen embryo transfers, and laparoscopic surgery outcomes. In 2019, he received a prize scientific paper award at the Annual Meeting of the Pacific Coast Reproductive Society for his research on mechanisms impacting male factor infertility. His current areas of interest include pre-implantation genetic testing (PGT), third party reproduction, and LGBTQ reproductive possibilities.

Podcast: IVF and The Safety Precautions Taken During COVID-19
September 21, 2020
View All News