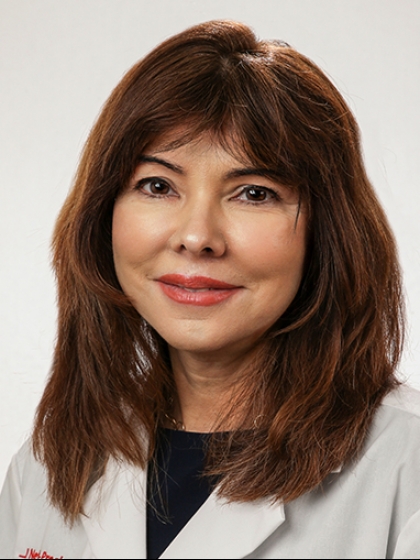 Dr. Gina Villani serves as Chief of Hematology and Oncology at NewYork-Presbyterian Hospital in Queens (NYP-Q). Dr. Villani is an expert in studying and providing cancer care and education to low-resourced, underserved populations. After obtaining her MD at SUNY Stony Brook, Dr. Villani was an intern and resident at SUNY Syracuse from 1989-1991 and completed her residency at North Shore University Hospital in Manhasset, NY in 1992.  She performed a fellowship in Hematology and Oncology at the New York University Medical Center from 1992-1996. Following this, she was Assistant Professor of Medicine and Attending Physician at the Albert Einstein School of Medicine from 1996-1997; Assistant Professor of Medicine/Attending Physician at the New York University School of Medicine/North Shore University Hospital from 1997-2004; and Assistant Professor of Medicine/Attending Physician at the Mount Sinai School of Medicine/Queens Cancer Center from 2004-2009. She was Chief of the Division of Hematology and Oncology at the Brooklyn Hospital from 2009-2012. From 2012-2017, she was an Attending Physician at the Memorial Sloan Kettering Cancer Center, serving concurrently as CEO and Chief Medical Officer of the Ralph Lauren Center for Cancer Care and Prevention in Harlem. The Ralph Lauren Center, an independent entity owned by the Memorial Sloan Kettering Cancer Center, was founded to provide cancer care and prevention to underserved, underinsured patients. At NYP-Q, Dr. Villani will build an interdisciplinary medical oncology cancer program in hematological and solid tumor malignancies.