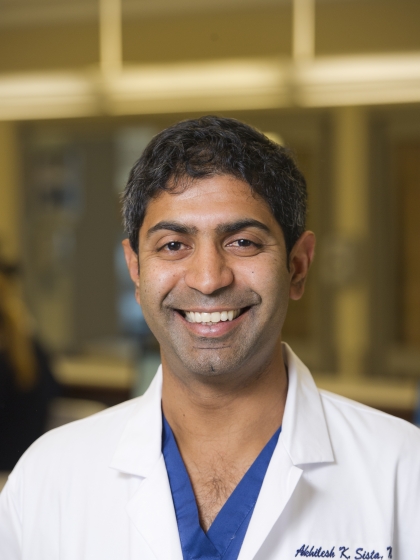 Akhilesh Sista, M.D. is a radiologist specializing in Interventional Radiology. He serves as Faculty in the Department of Radiology at Weill Cornell Medicine and performs clinical duties at the NewYork-Presbyterian Hospital-Weill Cornell Campus.

Dr. Sista graduated from Stanford University where he earned his B.S. in Chemistry in 1999. He then received his M.D. at Johns Hopkins School of Medicine in 2004.

Dr. Sista joined the faculty at Weill Cornell Medicine in June 2022. His clinical and research expertise lies in the medical and endovascular treatment of venous thromboembolic disease (VTE). He has specific expertise in catheter-based interventions for acute and chronic deep vein thrombosis (DVT) and pulmonary embolism (PE).

He has given 140 invited talks and moderated sessions at national and international meetings on VTE and has served on national committees. He has authored or co-authored over 80 peer-reviewed publications, including original VTE clinical research and clinical practice standards in the medical and radiologic literature with co-authors from multiple disciplines.

He is the national Principal Investigator of the landmark PE-TRACT trial of catheter-directed therapy for submassive PE, funded by the National Institutes of Health. He chaired the Society of Interventional Radiology (SIR) Foundation’s Research Consensus Panel with experts from 6 disciplines on Submassive Pulmonary Embolism in December 2015 which developed specific research questions to be answered by future research. He was the National Principal Investigator for Penumbra, Inc.’s multicenter (22 sites) prospectivetrial (N=119) of the Indigo CAT-8 thromboaspiration device for submassive PE (EXTRACT-PE), and was the co-National PI for the multicenter RESCUE study (N=120) of the Bashir Endovascular Catheter for submassive PE. He co-chaired the American Heart Association (AHA) Scientific Statement on Interventional Therapy for Pulmonary Embolism and is on the Steering Committee and co-chair the InterventionaI Committee of the NHLBI-sponsored C-TRACT trial. He won the 2018 Mark A. Creager prize for outstanding research, awarded by the Society of Vascular Medicine.

He is on the Board of Directors of SIR, and is vice-chair of a subcommittee of the AHA. He has been recognized as a Fellow of both the Society of Interventional Radiology (FSIR) and the American Heart Association (FAHA).