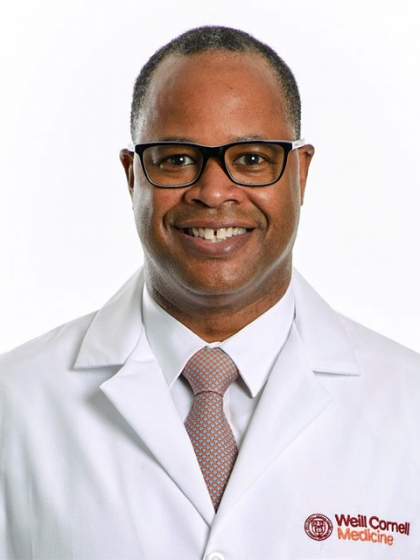 “There is no question that Weill Cornell Medicine offers all the benefits and resources of a world-class academic medical center – but we present ourselves more like your local community hospital. What makes us different is the patient-friendly environment. The human element is still emphasized here.”

Dr. Kevin Holcomb is Vice-Chair of Gynecology, a member of the Division of Gynecologic Oncology, and Associate Dean of Admission for Weill Cornell Medical College. He is gratified to work with so many gifted colleagues to deliver the benefits of cutting-edge medicine to patients while also overseeing the selection of the next generation of Weill Cornell Medicine trained physicians. He believes strongly in a humanistic approach to medicine, the benefit of personal connections with his patients, and that the quality of patient care is enhanced by mutual respect in the doctor-patient relationship.

Dr. Holcomb is committed to providing the most effective treatments for gynecologic cancers while also maximizing the quality of life for his patients. This commitment motivates him to develop and promote innovative robotic and laparoscopic surgical techniques for gynecologic cancer that result in faster recovery and less pain. His multidisciplinary approach to cancer care employs the latest medical therapeutics including immunotherapy and targeted therapies.

Dr. Holcomb’s dedication to medical education was recognized by the Council on Resident Education in Obstetrics and Gynecology, where he received the National Faculty Award in 2002 and 2004. He has also received recognition for his outstanding clinical care. He has been named one of New York’s Top Doctors by New York Magazine, one of the New York Metro Area’s Top physicians by Castle-Connolly Medical Ltd., and one of America’s Leading Doctors by Black Enterprise magazine. Additionally, Dr. Holcomb served as the President of the Board of Advisors for the American Cancer Society Upper Manhattan Office and was the recipient of the 2011 Chanel Award for Achievement in Obstetrics and Gynecology.

“The more I practice, the more I appreciate the training I received here at Weill Cornell Medicine”

Dr. Holcomb received his Bachelor of Arts from the Cornell University College Scholar program, a unique experience that allowed him to pursue a well-rounded liberal arts education while completing premedical coursework. He credits this program with providing him the cultural competence and sensitivity to treat the diverse patient population he enjoys in New York City. He earned his medical doctorate from New York Medical College. His post-doctoral training has included an internship and residency in Obstetrics and Gynecology at New York Hospital – Cornell Medical Center, as well as a fellowship in Gynecologic Oncology at the State University of New York Downstate Health Science Center at Brooklyn-Kings County Hospital Center. Before joining the faculty at Weill Cornell Medical College in 2006, Dr. Holcomb served as the Director of Gynecologic Oncology at New York’s Beth Israel Medical Center, and Assistant Clinical Professor at the Columbia University College of Physicians and Surgeons.

2011 Chanel Award for Excellence in Obstetrics and Gynecology

Senior Award in Obstetrics and Gynecology. 1992